This material on Astrochata was published at omore.city . There is a lot of interesting things about our sea.

The village of Olenivka in forty minutes from Berdyansk could be no different from other villages in the South. In the gardens ripen tomatoes, goats graze on the field, the road goes cow, near the local shop in the morning, several men hungo moonshine. Silence, peace, nature. And so it would go on and on if a strange couple did not come here last year. They bought two houses, built three toilets in each, attached a telescope, erected a tipi (this is the nomadic dwelling of nomadic Indians), and began inviting people for wine and stars. The space was called Astrochata.

It all started with the Crimean Observatory. About ten years ago, Alexey and Julia, a programmer and entrepreneur from Kharkiv, almost accidentally got there on a field trip. They spent a lot of money, time, stood in line for the telescope – and looked once a month. 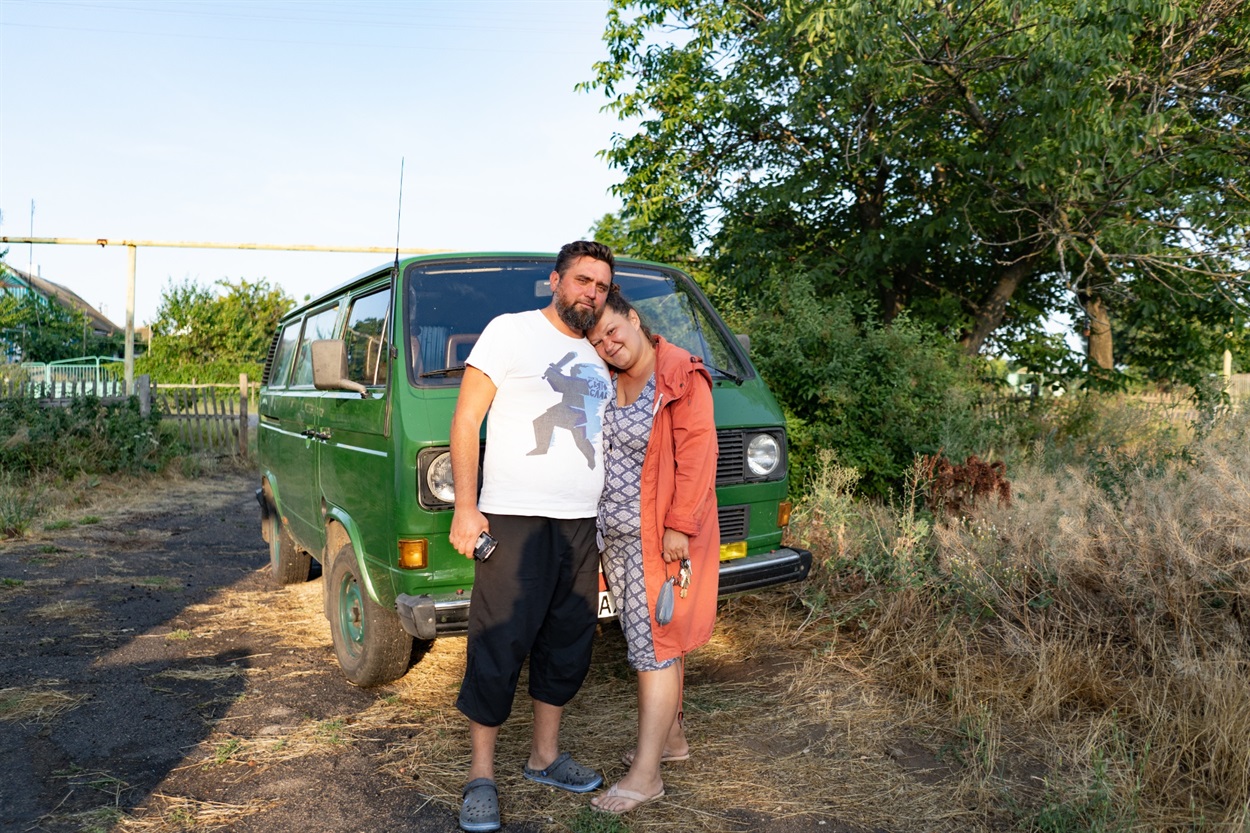 “So I realized that tourists like the moon the most. You show people the nebula we see in the past, billions of years ago that may not even exist anymore, and they are: fu, some point. And you can see craters on the moon, you can take a picture of the moon, ”Alexei recalls. Then, in the Crimea, for a photo with the moon tourists even got into a fight – one looked at the lens for a long time, but the other did not like it.

“They just didn’t let us look at the sky at the time,” says Julia.

If you cannot see the telescope in the observatory, then it must be bought, Alex decided, and bought.

Alex chose equipment for a long time. Immersed in all the nuances of power, goals, numbers and prices. The most expensive technique was for astrophotography. Such a telescope costs up to $ 5,000, additionally, you need to take an astro camera, and it can still pull thousands by 10. Within three months, he shoots some of the objects, and then photos can be mounted, taken photos, added colors – and something will come out. Astrophotography is expensive and long. There were telescopes for visual observation – this is when a person looks into the eyepiece. Not a penny, of course, but several times cheaper, and you can watch the sky in real time. 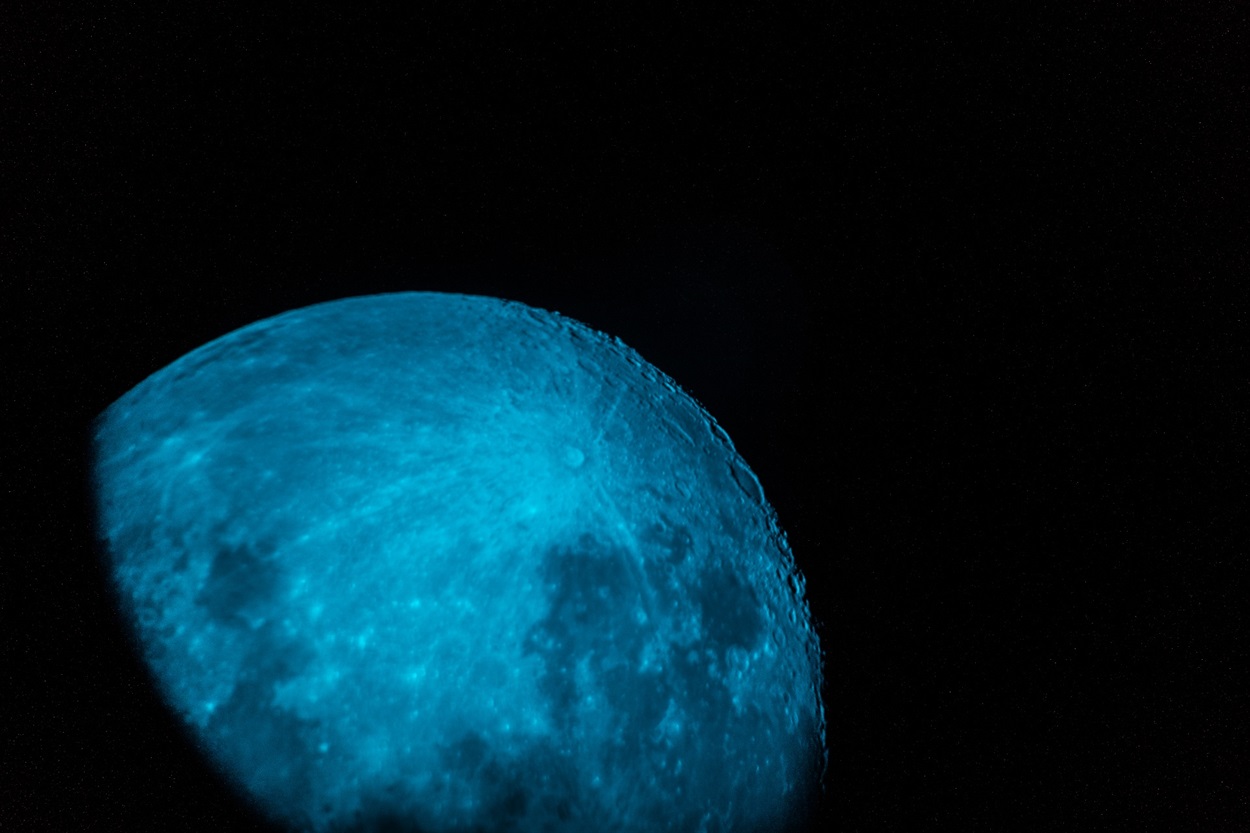 View of the moon in a telescope

Crimea, Alexey says, was a soft astronomy before the occupation. There were loads of events for astronomers, congresses of amateurs from all over the world. And then the peninsula was annexed by the Russians and those who came to the Crimea began to travel to Bulgaria.

Then Alexei thought: what about returning them to Ukraine and creating a space where they can observe the clear, unpolluted light of metropolises, the sky?

During the year, Alex studied the card of illumination of Ukraine. The best visibility is always at the top of the mountains, but the weather in the Carpathians is too risky. Rolled out the telescope – and it snowed. Does it rain. Optics may not survive such variability. Alexey wrote out all the places with the least light pollution: Odessa region, Obytichna braid, Berdyansk braid and from ten points in Ukraine. When the list was formed, Julia and Alexey went with him to field research. They came, examined, analyzed – and crossed out. 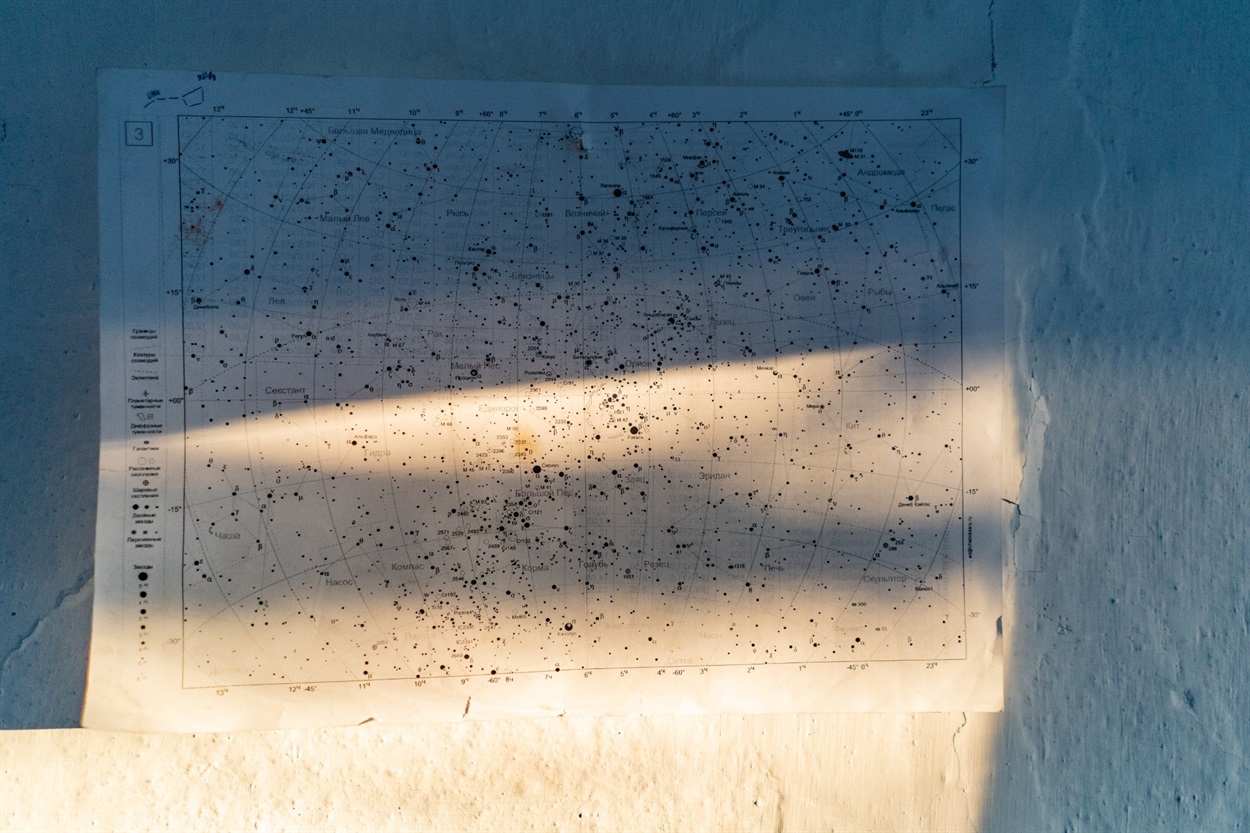 Olenovka was also on the list, but this option was treated with caution – the road from Berdyansk is barely a heap, people can think of going this way. But the doubts were dispelled as soon as they entered the village. Julia saw an abandoned house by the road, on a hill. She climbed through the fence, considered possession – and thought she should take it.

“We wanted to buy two houses. One was supposed to be something like a reception desk. And in another, we planned to build a guest hostel, lay out a bonfire, watch the telescope in the sky, ”says Julia.

The second house was chosen for several hundred meters: around the steppe, open horizon. For astro-observations, this was the perfect location because the trees did not obscure the visibility. 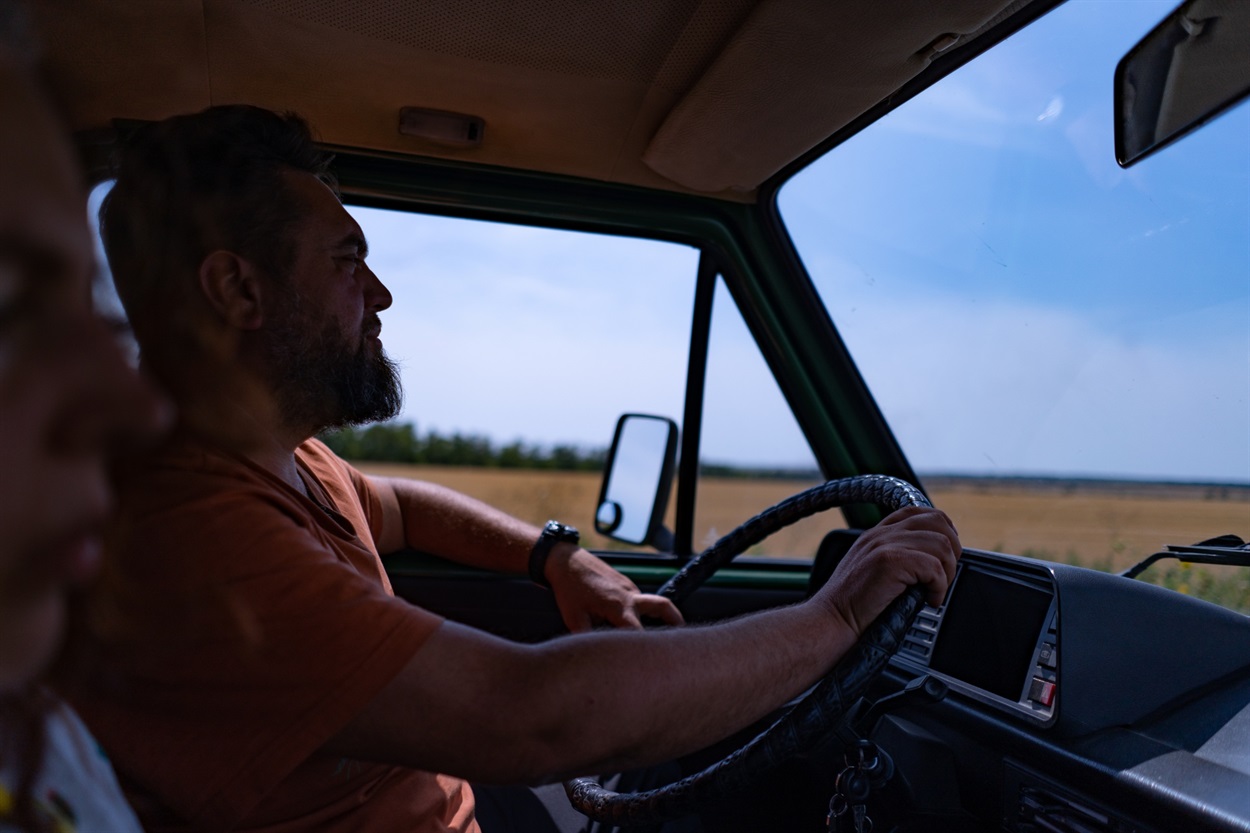 Before choosing a place for Astrochata, Alex and Julia traveled from a dozen places across the country

The real estate in Olenovka was not popular, so the house was bought for just over a thousand dollars. Price for a trip to Turkey or Egypt. About two more were given for paperwork and electricity. Renovation lasted more than a year: it was necessary to do from scratch toilets, showers, tent, kitchen, overhaul in old houses. 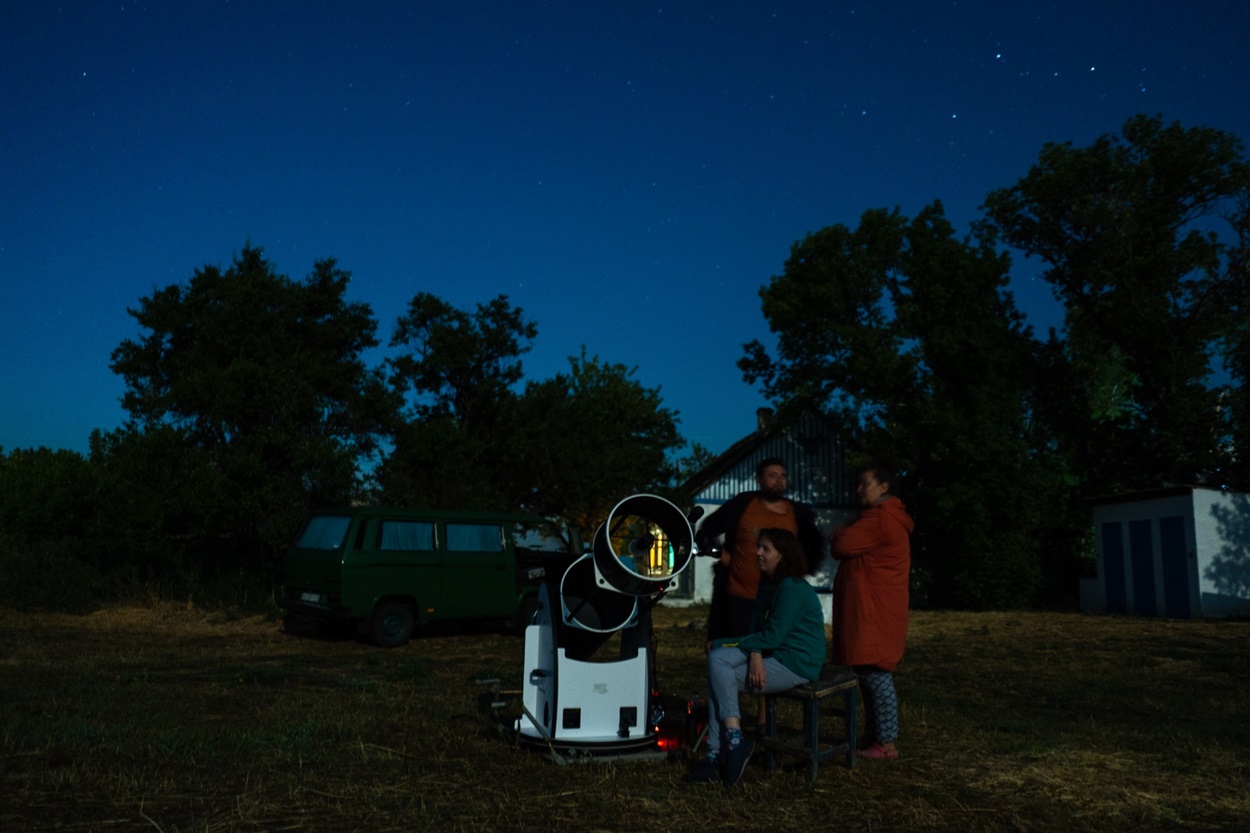 Evening Observation of the Galaxy in a Telescope

“I have a beard and a minibus with flashlights. So the locals thought I was a gypsy. And then we decided that we were refugees from Donetsk, and we would bring the same refugees here. All because we were building three toilets at once. Logically, one family needs one toilet, and a Gypsy needs three, ”Alexei laughs.

During the year, people were so scared that he even refused to sell them home-made meat or milk, Julia recalls. 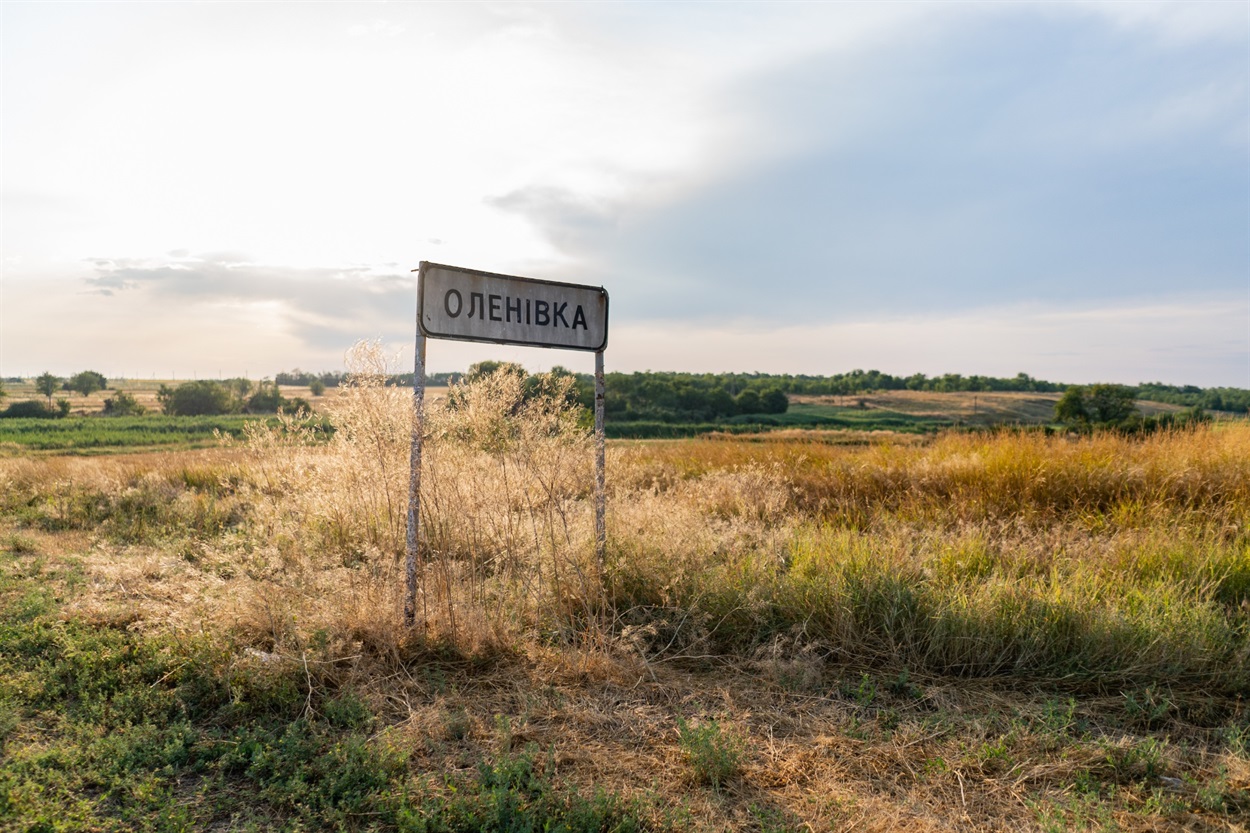 At the time of the last census, the population in Olenivka was 127

The village head then told them, “Time must pass, people must get used to it.” He suggested that the children have an excursion – “so they can see that you are not a bandit.” He collected children from all the surrounding schools, brought him, Alexey gave a lecture, told about astronomy. Then, while the repair was still in progress, a movie theater was set up in the shed. They pulled up a big screen and called to watch movies – first for ten UAH, then for free. Invitations were hung around the village on message boards. But no one came.

“There is no time for people. Who works, who thumps. They watch movies at home, ”says Julia.

The contact was gradually made sense, the locals got used to it slowly but got used to it, and with several neighbors even managed to establish mutually beneficial cooperation.

For example, Julia regularly supplies milk bottles to a local farmer, and throws her some home-made produce.

The Astrochata was not just a hostel. It had to be an original space with a proper design. They came up with a traditional nomadic dwelling, a tipi (something like a wigwam) near the house. Previously, they were made from animal skin, then started with tissue. The design is set so that it can even fire a fire in it – smoke will go out through a hole in the ceiling. The fabric was bought for 8,000 hryvnia in the Czech Republic, and the wooden structure was installed with the local guys who called for help. The eight-meter beams were taken from an old barn. They piled hay here, tossed armchairs and hung garlands. You can sleep, but spiders are fed up.

The height of the traditional dwelling of nomadic Indians is 7-8 meters. Tipi is built of long wooden beams and without a single nail. Previously, bison and deer skins were used instead of cloth.

Before launching, Julia and Alexei went on field trips to France, Germany and Belgium to see how they welcome guests in similar estates abroad, what they entertain and how they entertain. One French woman said about the food: “You have a fish today – feed a fish. There is an orphan – feed a cheese, there is a chicken – feed a chicken. The main thing is that there were cream. ” 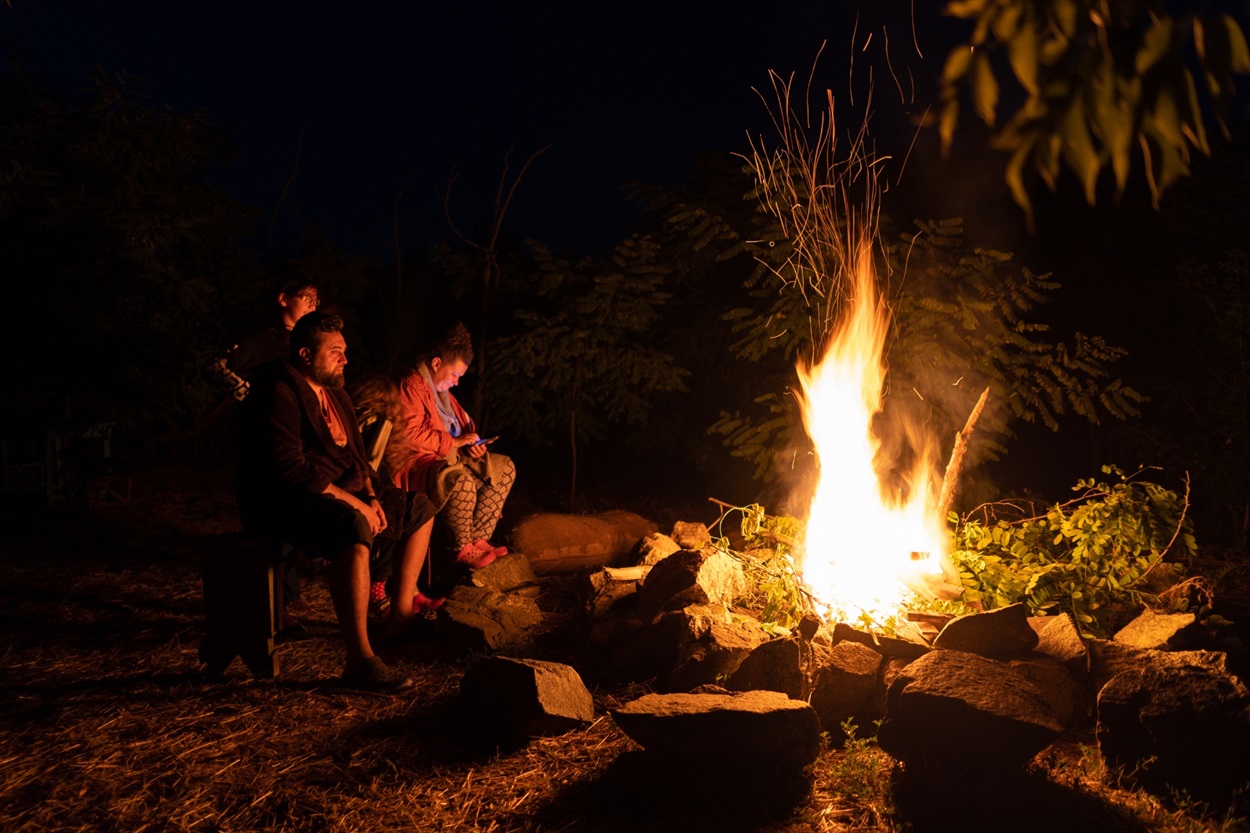 To the campfire, local children occasionally come together

“People are different. One is enough 5 days to lie down at sea and come here. Others in the sea do not like, but want something active. In fact, the important thing is that the place the person came to was interesting. Reindeer is very interesting. Once there was a colony of German Mennonites, there are even abandoned old burials. Silgolova said that as it is necessary – we will clear, we will lead tourists ”, – says Julia.

The old bridge, the German houses, remained here. Opposite Astrohata is a career, you can walk the steppe for hours. Near the sea, lakes – in short, there is something to do. 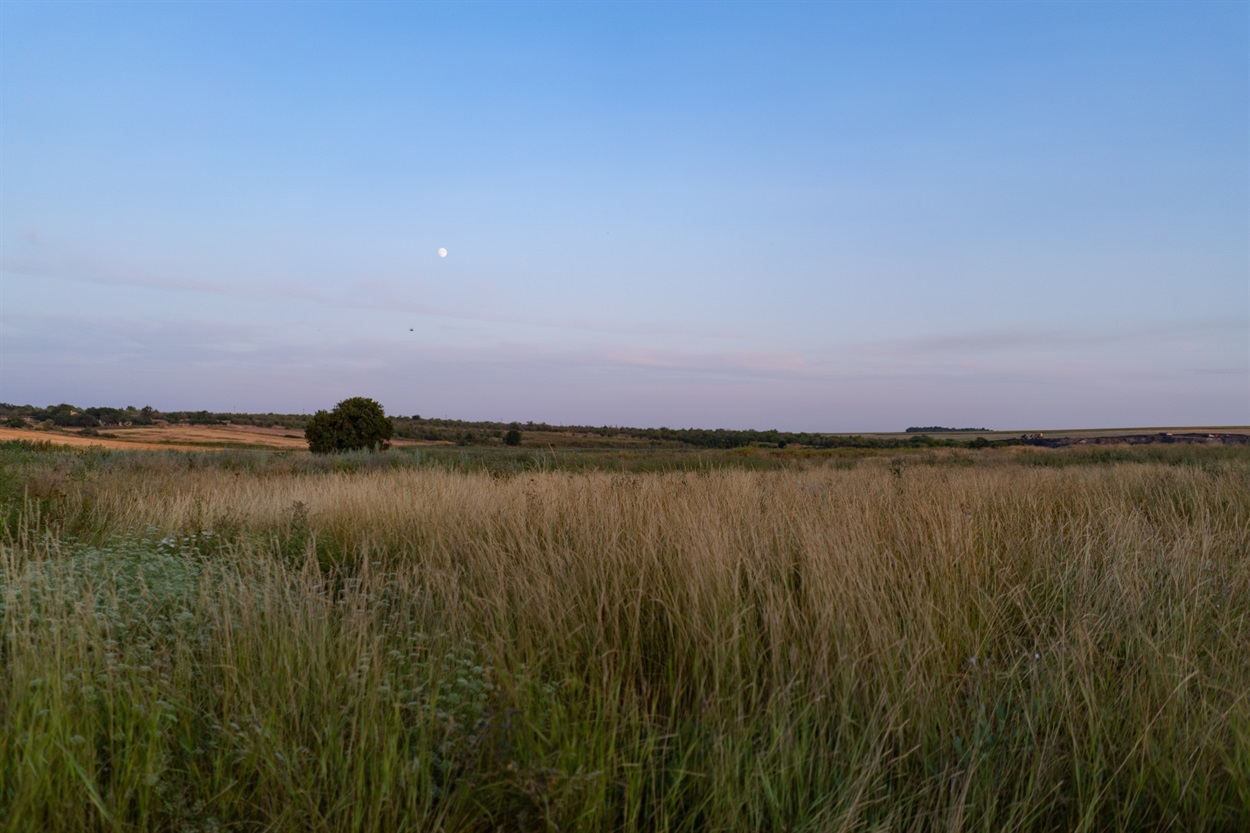 The village of Olenivka

The full-fledged work was launched in the summer of 2019: they registered for bookings, created a site and social networks. They were mostly oriented to the Zaporozhye and Kharkiv public, but the guests came even from Kiev.

And they also organized a children’s camp. The idea came about spontaneously – just a couple were traveling here for the summer, and friends, relieved at work and lent, asked to pick up their children. Four. After days in the village near the telescope, they returned in awe, so Julia was struggling to make meaningful summer changes.

In addition, it turned out that the schools canceled the course of astronomy. So it was something like an astronomical camp.

“We have already worked out two changes. The kids were shocked that we had a spiral galaxy and we were looking at another from the third ring. They discussed it at midnight, ”Alexey says. 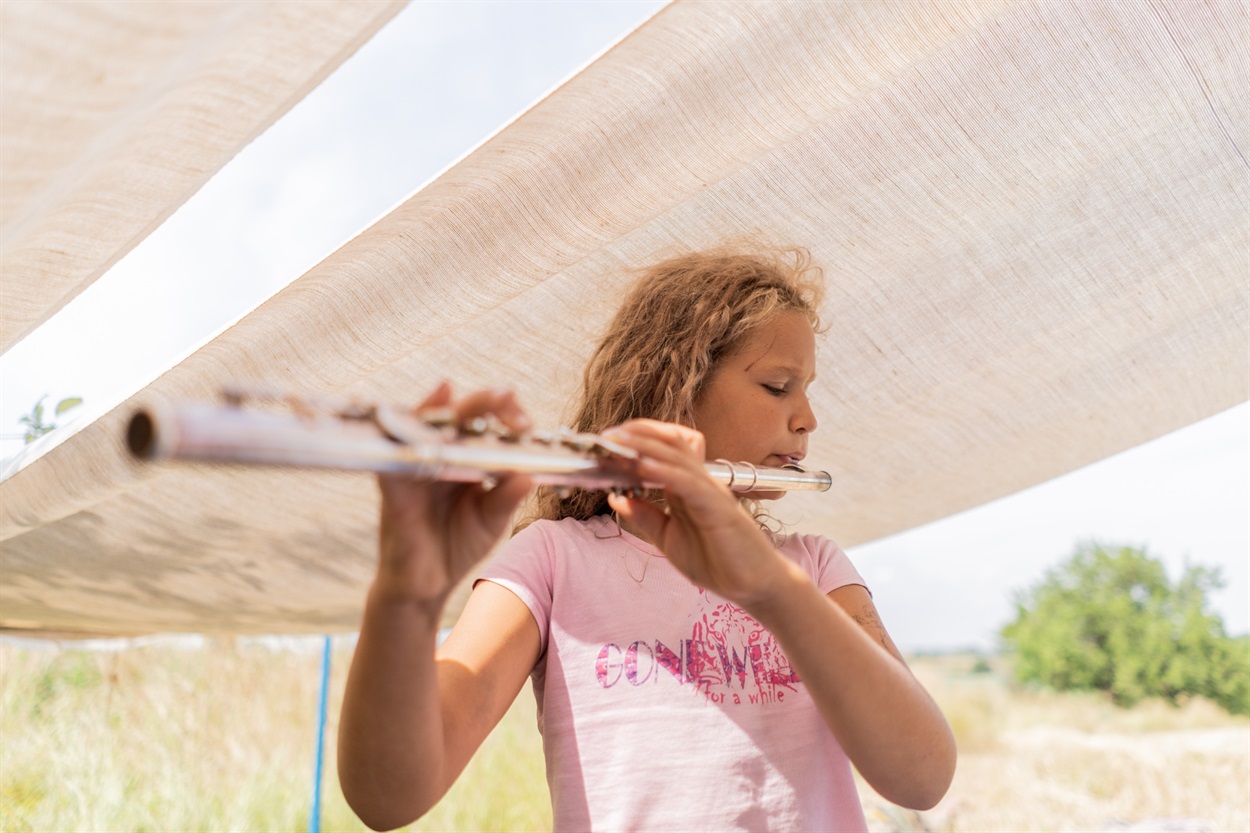 Veronica, daughter of Alexei and Julia

The discovery was not only the facts of the galaxy’s life. Here, city children learned, for example, that berries do not grow in the supermarket.

“One local girl told her that her parents wanted to grow strawberry varieties for sale. Our children do not quite understand why to grow strawberries and sell them to someone if you can eat them yourself. And I say that for fruit to appear in the supermarket, someone has to grow them. They were surprised. The fact that you can tear the currant yourself and eat right away has also been a revelation, ”says Julia.

There are many plans for Astrochat. Next year, they will finish the pool, they want to cook cheese, plant flowers, and develop a local excursion.

“We want people from Berdyansk, especially locals, to come here. We get to know the tour operators in the city, and we plan our first excursions, ”Alexey says.

People leave for the most part is short and they choose to go to Turkey or Egypt. And if they go to Berdyansk, they will be paid for the number on the coast for 2 thousand hryvnias.

“And we want people to have a cheap vacation, even with a scientific bias. Three times a week we have a shuttle service to the sea and the hostel costs 100 UAH. Plus, there is no resort chaos here. I think when people understand this, they will start to visit us, ”Alexey says. 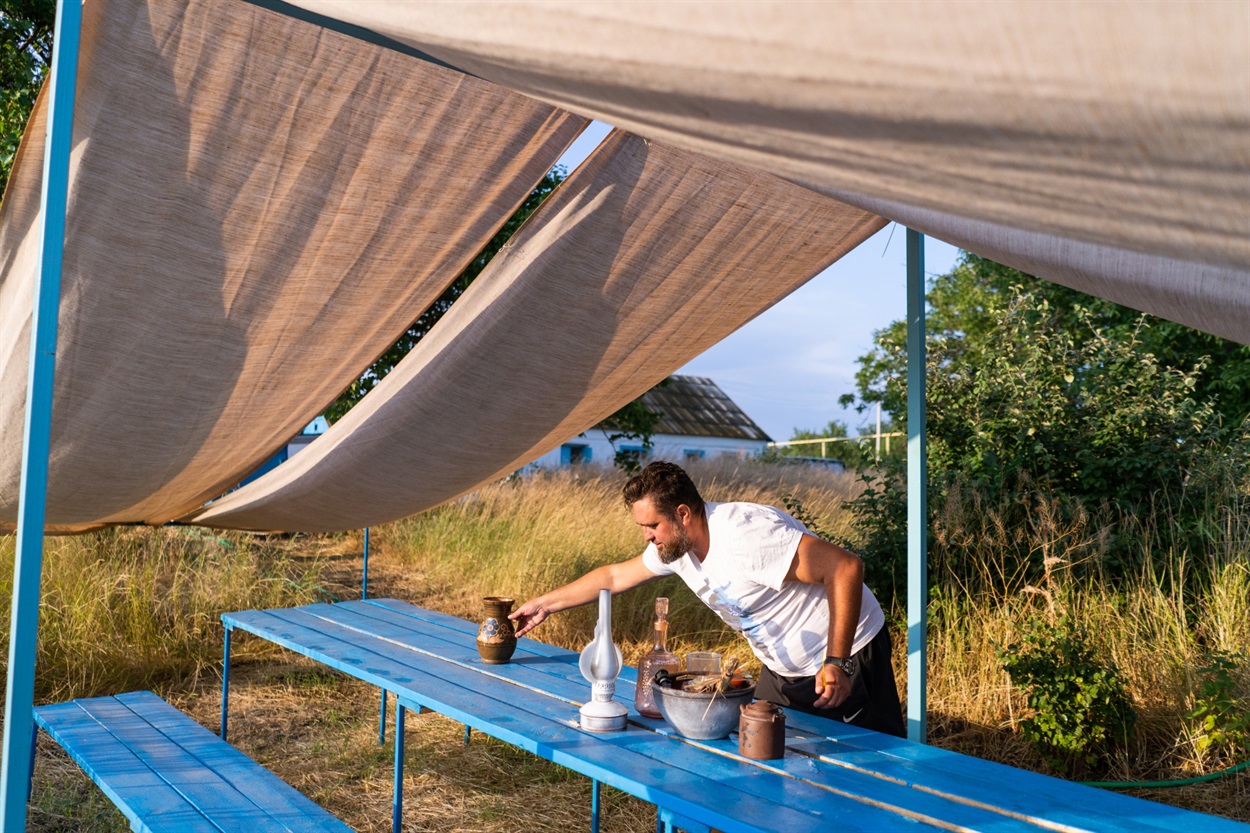 Alex prepares a table for breakfast.

A peach garden has already been planted near the Astrochats, and if all goes well, they will make a peach garden.

And a contact zoo with goats, ducks and lambs.

And maybe there will still be car camping.

And a lavender field.

But the main and unchanging plan is to watch the galaxy in the telescope. In Astrochat, this is called “Give the Sky.” 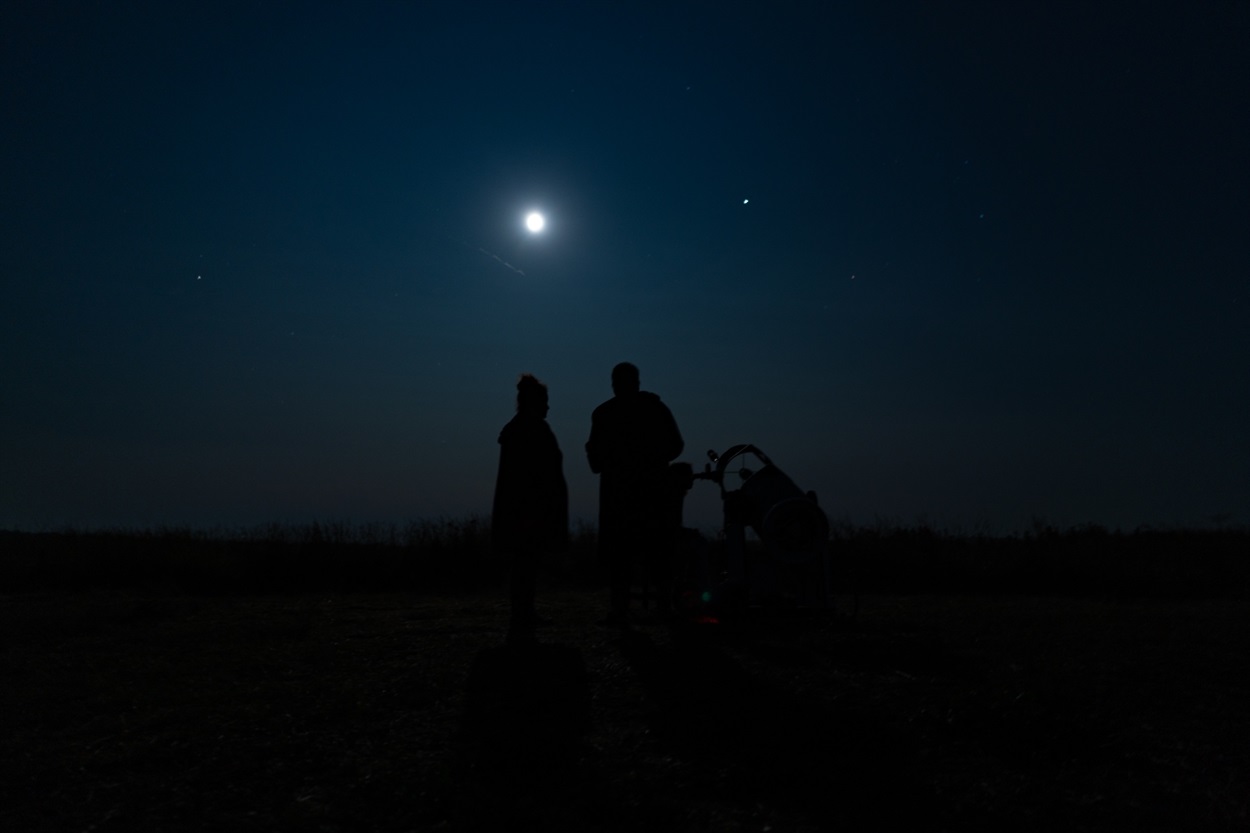 Watching the sky, Julia and Alexey can stay at the telescope all night.